I work with Shelly Froehlich, the founder of Rotten Rottie Rescue, as a foster and trainer. 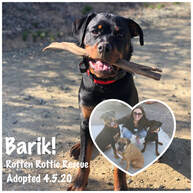 Barik was purchased from a breeder in New Mexico.  At 8 weeks old he was growling at his owner.  At 10 weeks old he bit her over a resource.  He not only bit her, he shook her arm as well.   She had been bitten by him twice.  She hired two different trainers to help her with him.  They were trainers that didn't believe in correcting dogs, so they recommended trading up.  Meaning, if she wanted to take a resource from him, she should offer him a more valuable resource.  This just rewarded his guarding and it got so bad he was even guarding his legs and feet.  At 5 months old, she surrendered him to Rotten Rottie Rescue.  I saw the post on Facebook, called Shelly, and said let me take him for three weeks so that he doesn't become a menace to society.  Just regarding obedience, he was one of the hardest puppies I've every trained.  Even at three weeks, his obedience was still mediocre, at best.  He had a solid 'out' command if he was guarding, he would drop it, but that strong desire to guard never went away.  If you pet him anywhere on the back half, he would aggressively growl.  He's genetically compromised and needed a lot more time and training than I could give him.  To be honest, human aggression isn't my jam, and how to rehabilitate a 5 month old puppy that has very aggressive genetic components isn't my jam.   His adopter knew this, adopted him and then sent him to another trainer that does a incredible job with human aggression cases.  He's there right now and I will update when I have one.
Nana           ADOPTED

Fearful Nana was abandoned by her family on a condemned house porch and could not walk on her back legs.  Rotten Rottie took her in and provided the physical rehab she needed to gain the strength to walk again.  For obvious reasons, she didn't trust people.  Shelly contacted me after she was at a adoption event and was shivering and hiding under the chair of her foster dad.  One thing you should know about me, I can't turn away the fearful dogs.  They tug at my heart strings.  I took her in for 2.5 weeks pro bono and by the end of our time together, I had her full trust and she could hold a down/stay at the very busy Prescott Courthouse!  She still isn't ready for strangers to approach her and that's ok and may or may not come later.  But now she can go out and enjoy herself while working on her confidence.  Having multiple positive experiences around people will also continue to increase her confidence around people.  She just needs to be managed with special care and I always make sure the foster family knows how to do that. 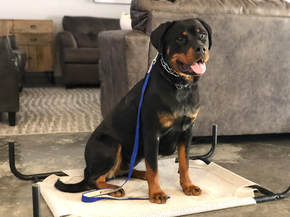 Athena was 9 months old, shut down, scared and not ready to be adopted so I called Shelly at Rotten Rottie and asked her if I could take her and build her confidence and then teach her future owners how to manage a insecure Rottweiler.  Her transformation was amazing and so rewarding!  She's now living THE LIFE with her new family. 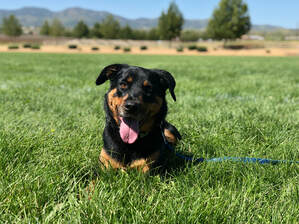 ​Fearful Bullseye was a Rotten Rottie that had a genetic component to her fear but also lived with neglect.  She was surrendered to the rescue and taken in by a foster family that was open to keeping her but she wouldn't engage with them, hid in the corner, scurried to and from her crate and to her food.  It's no way for a dog to live!  Shelly contacted me asking if I would take her on and of course, I can't say no to the fearful ones so I took her pro bono.  (Payment comes in the transformation).  :)   I rehabilitated her for three weeks and with the help of leadership, training, repetition, jobs, exposure and the appropriate tools, she became so much more confident and her fosters were amazed at what she could accomplish!   I trained her foster family and they adopted her!   Now, she hangs out in the living room with them even when they have guests over, and they take her places!  Now she is living her life rather than just existing!  (And no more bouncing around for this girl!) 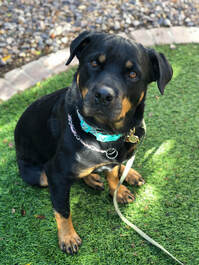 There are also two follow up blogs posted after that one
​ 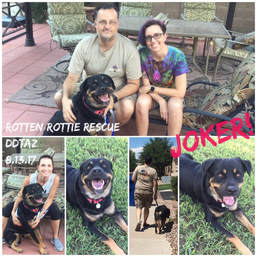 Joker was rescued from the euthanasia list at the pound for his fear.  It took Shelly 30 mins to get him to trust her enough to get him out of his kennel.  He was placed in foster care and was there for about two months.  Shelly had a hard time introducing him to new families because he started to protect his foster family, their house and himself and wouldn't let people in the house to meet him.   I took him for a three week board and train and worked on major confidence building, socializing with dogs and humans, full obedience training and e collar off leash training.  His transformation wasn't easy but at the end of three weeks, he let his future family walk right into my house, met them and it was a match right away.  His new owners are trained as well and I'm here for them along their journey because Joker still has lots to learn about trust and allowing a human to guide him through his life rather than taking matters into his own hands...er...paws.

Rocky     ADOPTED
Rocky was abandoned by the only family he had ever known at 5 years old when they moved out of the country.  They didn't have any behavior issues with him but as soon as he was turned over to Shelly, he suffered from severe separation anxiety and aggressive resource guarding.  This guy was the most anxious, nervous, stressed out dog I had ever seen!  In my home, I took over the leadership role and offered him a balanced life with rules, structures and boundaries.  He learned to walk correctly with excellent impulse control on walks, he lived harmoniously with my dogs, he learned the place command and rocked it!  The place command literally gave him back his sanity. It was the only place that he could lay down and actually fall asleep and not be under my feet at all times.  The settling of his nerves allowed him to make amazing breakthroughs and I started to watch the real Rocky emerge!  He has since been successfully adopted and is living in a loving home for the rest of his life. 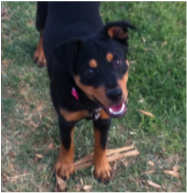 Harley      ADOPTED
This cute girl was adopted quickly; we only had her for a weekend.  She hadn't even completed all of her shots yet so we couldn't even take her on walks.  Her only job here was to chew on Dexter's jowls!  And she did it well! 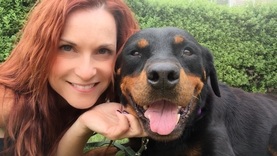 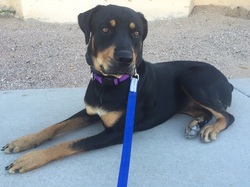 Layla      ADOPTED
Oh this girl was a challenge!  She was a owner surrender to the pound at 1.5 yrs old.  They stated they didn't have time for her and they weren't kidding.  This girl was super bratty and didn't know any obedience.  She was quickly put on the euthanasia list because she was snapping at any handler.  The rescue was able to get her to trust them enough to bust her out of doggie jail and she went straight to foster care.  Two very experienced fosters could not handle her snapping, barking and brattiness. I picked her up and we couldn't get a prong collar on her without her snapping at our hands!  Over the course of 3 days I was able to put a prong collar on her and then a e collar.  By day 4 she was more calm and I had learned that her snapping was more like mouthing and she didn't intend to do harm, she just knew that behavior would make the human back off.  A two week board and train did wonders for her obedience and state of mind.  The mouthing stopped, she was fully e collar trained, obedient and very loving.  So sweet.  She was adopted by a wonderful family that already had a male Rotten Rottie that I had also helped train.
Update:  She's been in her new home for 4 months now and doing great! 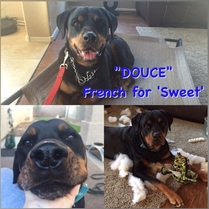 Douce     ADOPTED
This girl is 5.5 years old and has grown up on a farm with the same owners her entire life.  They were seniors and needed to move back to Germany to be with their family and thought it was best for Douce to find a new loving home rather than travel across the world.  They wanted the best for her so they paid for her training with me before she would go to foster care.  Guess what?  I couldn't let her go to foster care and bump around the system, so she will stay with me until she gets adopted. :)

Update: She went straight from me to her new owner.  Douce is doing great and her new owner gets complements on her behavior!  She's even been back to me for boarding and it's like she never left! 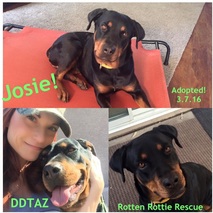 Josie        ADOPTED
Josie was a stray on New Years Day 2015 when she walked into someone's garage with a chain around her neck.  :(  After her finder searched for her original owner without success, he contacted Rotten Rottie Rescue who took her in and placed her in foster care.  Josie was a aggressive resource guarder of her food to other dogs in the foster home.  She would fight a dog for just walking by her food bowl or food bag.  She was also jumping on kitchen counters, going in the garbage and jumping on people.  Basically, this girl had no idea how to act inside a home.  I took Josie in pro bono to get her trained up and adoptable.  I had her for two weeks where I taught her basic obedience, a proper walk and boost her confidence because she was fearful of many things.  Working off leash on e collar helped solidify her obedience and made her confidence grow by leaps and bounds.  I trained away her resource guarding and got this girl calm, balanced and happy.  On the 14th day of her stay, she met her forever family.  They took her home after a two hour lesson on how to maintain her and her training.  From living on a chain to living in a home with balance between love and structure, she hit the jackpot!